Perspectivity at Interpore in Valencia 2019 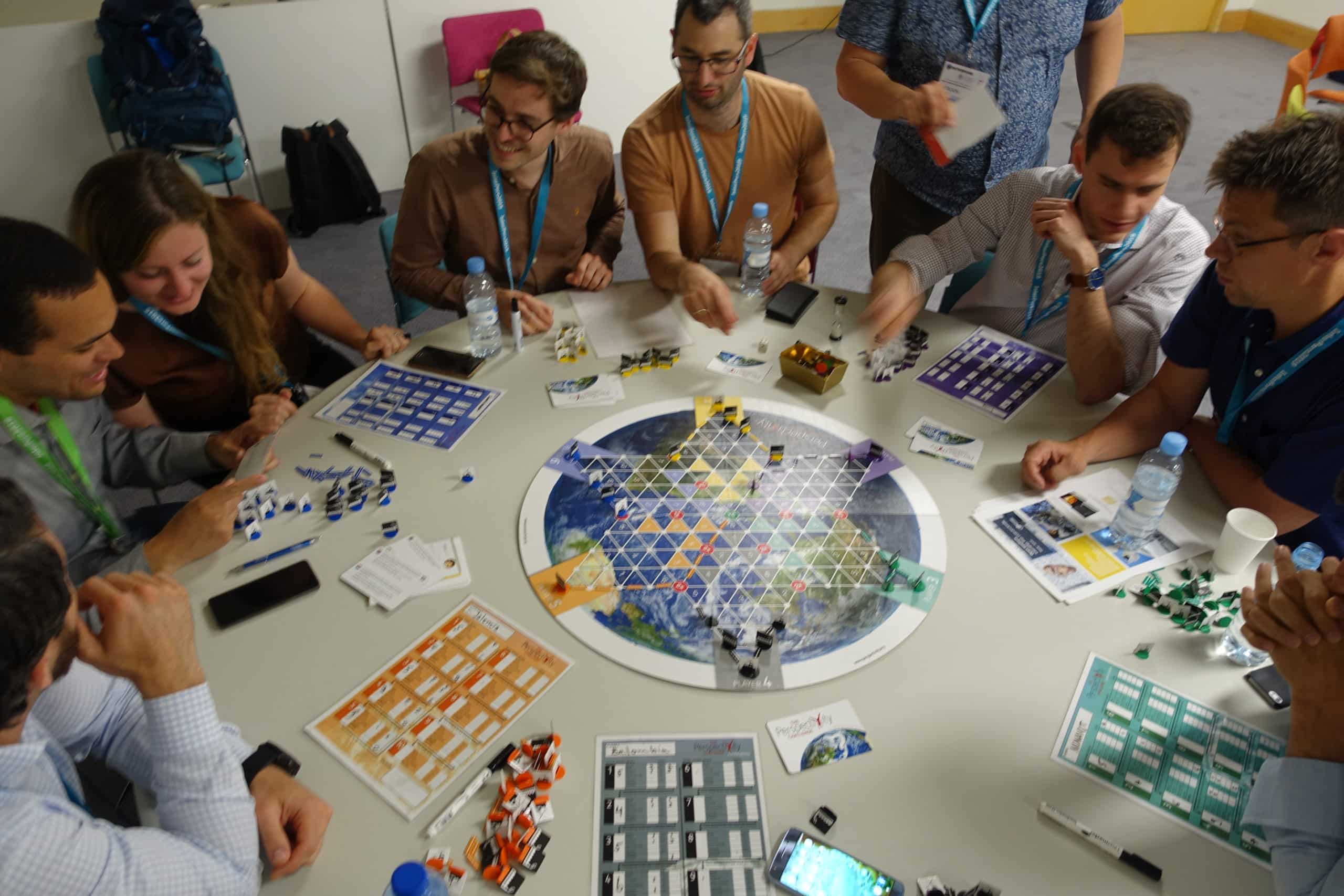 “Perspectivity had the opportunity of facilitating the Climate Challenge at Interpore 2019 in Valencia, Spain. Interpore is the annual global conference for Porous Media research and draws over 600 Phd, Post-doctoral research students and faculty members from leading universities across the globe and industry insiders. The Climate Challenge session this year followed the success of the Stress Nexus! Challenge at Interpore 2018 in New Orleans, USA.

Different strategies
We had 20 participants across two tables including few who had played the Stress nexus Challenge last year. Hence, we were expecting interesting dynamics and perhaps leaders to step up during the game. As is typically the case, every table interprets and plays the game very differently. A combination of different strategies including only green, cautious & balanced growth and the driven “we need to get to the 3x location in the middle” leads to a check point across teams by round 3 or 4. While on one table, we had some teams toy with the idea to collaborate with maybe one team questioning the rationale, whereas on the other table the disasters lead to a clear divide between the “winning” team and the rest.

At one table, there was good collaboration between five teams leading to an agreement to build a continuous road network across the board that can be shared by all teams except the one team that decided to be territorial. Unfortunately, this team, despite having a higher score due to the strategy of saving extra, started building too many factories resulting in up to three disasters in one round causing destruction across teams. This made for a good moment during the debrief when the teams appreciated the importance of leading everyone together as the consequences in a connected world are shared.

The second table, on the other hand, went down the path of everyone teaming up against the non-green winning team, also deploying extra capital to the team best placed to impact this winning team. Many on this table were upset that despite all efforts this team still ended up with the highest score on the table. The moment during the plenary debrief when the overall team scores were shown along with the destroyed capital did cheer few participants on the table, but the pain did linger on for a while.

Open source
Given the varied strategies employed by the teams, the debrief session at and between the tables was rich with everyone sharing their motivation, their struggles with balancing their vulnerability and doing the right thing and dealing with uncertainty when the primary job as researchers is to manage uncertain outcomes. Towards the end, one of the participants shared his personal experience where researchers who have made their code/work open source has typically led to a better outcome.

And as always, the best is saved for the last, i.e. the drinks after the session where the discussions move from the game to solving real life problems. For example, a Dutch professor from Arizona shared his dilemmas around how his niche research, while focusing on increasing the sustainability of a part of the construction industry, misses the bigger discussion around how growing urbanization, and hence additional construction, in the first place creates a more complex problem across the entire supply chain of the construction industry. He on his part though was very keen to host a similar session at an event between universities in the USA and get the dialogue rolling on the bigger picture.

Something new each time
As a game leader, no matter the many times you have facilitated such sessions, there is always something new and different at every session. Interpore 2020 is scheduled for May next year in China (heads up for folks in Asia). Based on the feedback received, I am hopeful Perspectivity will be invited again.

A couple of additional comments from the game organizer and participants:

The reception was good, we even had people coming to the event in Valencia because they had attended the game in New Orleans. So that means they liked enough to want to repeat it. – Marcel Moura

This time, my strategy was different. Although I knew the game goals a priori, it was interesting to see it from an external perspective. I didn’t try to lead the world to be a better place. Instead, I was kind of a grey-player, and observed the interactions between the other teams. It was very interesting to see how quickly it becomes a personal race, where greed and anger get on the way of well-thought decisions.One would think that a group of organized scientists would be able to take better actions towards developing a world-plan, but personal interests and egos drive difficult communication and lack of empathy. It’s really shocking! I’m not in charge of taking any important decisions or know anyone who is. But, in my academic experience, I’ve seen that in the scientific community there is jealously and ego which impedes science to grow to its maximum potential. And we are supposed to be the smart ones :/ I really like these games. – Javier Santos, University of Austin, USA (also played the Nexus Game at Interpore 2018)